The Death of Flash: Lessons in Community & Democracy

Flash: the once and future king.

The Death of Flash

What an obsolescent programming interface can teach you about democracy and community.

I started programming in earnest in 2001, using (among other things) a now largely defunct technology called “Flash.” It was a lightweight framework originally designed to do one thing: vector animation on webpages. It did that really well, so well in fact that it began to be used for other things, such as creating website interfaces. Pretty soon, it looked like Flash might take over the web, since it gave web designers so many possibilities and so much control.

Then a certain CEO-on-the-rebound named Steve Jobs banned Flash from his mobile devices, nominally because Flash was buggy (among other stated reasons), but really because Flash’s owners had screwed Jobs over a few years earlier. This was a turning point, because Jobs’s mobile devices went on to rule the world. That brought about a slow death for Flash, and at the time of writing it’s a minor player on the web, used for some games and video playback.

A Democracy of Nerds

Flash’s demise matters because of one thing: Flash was democratic. It was (at first) a really simple, easy-to-use, easily understandable programming interface. This made it accessible to all kinds of people who wouldn’t otherwise have been able to program much of anything.  That’s important, because it allowed Flash to create a community of ordinary people – enthusiasts – who came together at events such as the original Toronto Flash Users’ Group, which spawned the global FITC festival. Nowadays we call such amateur groups “Maker” communities, but Flash existed long before that word became fashionable.

Flash allowed a community of people to spring up and cut across barriers.

Community and democracy are important concepts: they mobilize and empower people to do interesting, important things. Writ large, they topple dictatorships. Writ small, they connect people in meaningful ways. Because of its low barrier to entry, Flash allowed a community of people to spring up and cut across barriers: programmers and designers, techies and artists, amateurs and pros came together. That’s rare, and Flash allowed it to happen, if only for a few years. At events around the world, enthusiasts took turns programming animations and interactive art pieces in “Flash relays.” People shared their projects and showed others how to do the same in quick & easy ways at coffee shops and pubs around the globe. 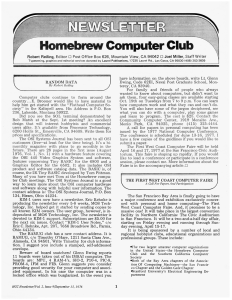 That geeky community spirit, cooperation, accessibility and general goofiness probably wouldn’t have been out-of-place at the nerd communities that preceded Flash, such as Silicon Valley’s Homebrew Computer Club, which brought computer enthusiasts together at a time when computers were clunky hand-soldered machines programmed with levers. That club also has the credit for gestating a then-unknown enthusiast named Steve Wozniak, in addition to the fathers of mobile computing and cartridge-based video games; that alone shows the power of small, focused communities of nerds.

Eventually, Flash’s bubble burst. Not only did Mr. Jobs slam the door on Flash’s access to his budding empire, but the platform became a victim of its own success. Technology is never static: it’s either growing or dying. Flash attempted to grow by going mainstream and enterprise-friendly. Unfortunately, doing so stripped away Flash’s easy-to-use and easy-to-understand aspect and turned it into a more-or-less fully-fledged programming language. This added complexity placed Flash out of reach of a lot of amateurs and non-techies. Going enterprise might have been the only way to grow Flash and take it to the next level, but it also made Flash less accessible and more corporate. That meant an end to the broad-based community that was able to hack around on Flash with minimal barriers to entry. This, as much as anything Mr. Jobs or anyone else did, contributed to its demise.

Nothing has come close to the ubiquity, reach and creativity of Flash’s early community.

I miss Flash. I miss its ease of use and capacity for fun, even if it was as buggy as hell. Programmers will tell you that there are alternatives that are just as easy to use (Python, Ruby and JavaScript, for example). This needs to be taken with a grain of salt: people who are really good at something will tell you how easy it is to do as well as themselves, because people naturally evangelize what they love: doing so makes them feel good. Unfortunately, what experts find easy to do is not what the rest of us find easy to do, and thus their assurances need to be taken with a grain of salt. 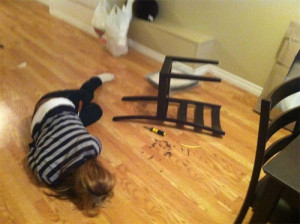 Nothing is ever as easy as advertised….
Photo: smosh.com/smosh-pit/photos/20-people-who-have-failed-putting-together-ikea-furniture

Platforms come and go, and many have attempted to provide easy interfaces to online creativity; none have come close to the ubiquity, reach and creativity of the early Flash community. I hope that changes, and a new generation of nerds rallies around some new platform that allows anyone and everyone to goof around, share and create something fun and amazing.